The town of Vimperk lies at the intersection of Prague – Passau and Prachatice-Klatovy routes at the foot of the peak of Sumava Mountains called Boubin. Vimperk is also called the gate and the heart of Sumava. The town is known for its printer’s and glass-making tradition.

At present, Vimperk is a center of the Sumava National Park. It stretches on 69,030 hectares and is the largest national part not only in the Czech Republic but in the whole Central Europe. Together with the Protected Landscape Area of Sumava and the Bavarian Forest National Park it forms the so-called “Green Roof of Europe”, declared a biospherical reservation by UNESCO in 1990.

The Golden Star (Zlata hvezda) Hotel is centrally located in the town of Vimperk within easy reach of the municipal park and Vimperk castle. Built in 1833, it has been the centre of social life for the Czech community since its completion. In 1885 the Schwarzenberg family made a contribution to assist in annexing a ballroom with a capacity for 300 persons.

In the 1930s the Golden Star Hotel came into the possession of the National Sumava-mountain Unity. Within 10 years it was sold to Mr. Alois Antos who carried out the overall reconstruction of the property, building an additional floor and fencing off the plot of land. The estate once comprised tennis courts and even a skittle-alley.

In the 1960s the building underwent a complete reconstruction. In the 1990s the Golden Star Hotel was neglected and fell into disrepair due to inconsiderate decisions made by the state administrative bodies.

In 2007 the Hotel was bought back to life by Mr. Zdenek Kutil who started its reconstruction with contributions provided by the European Regional Development Funds. It should be noted that the town of Vimperk is a lead partner contributing to the success of the project. 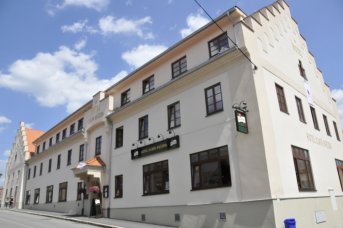 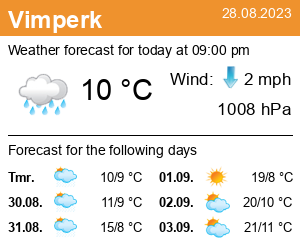 Do you have any questions or need advice? Please leave us a message via this form.